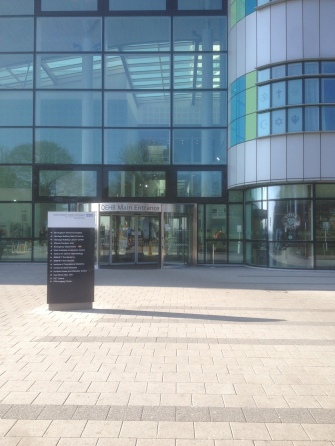 Conference report LGBTIQ+ Intersectionality and Islam conference 2019 Saturday February 2019
I have just used first names for the speakers, following the practice on the Hadiyah website. I am happy to add surnames, but I am not sure what level of openness each speaker is comfortable with. I am not Muslim and if I have made any mistakes in my understanding of what was said, I am happy to correct these mistakes.

This excellent conference took place at Queen Elizabeth Hospital in Birmingham. This was a really positive event and showed the level of thought that the organisers had put into the details that really matter. For example, all the toilets in this section of the building had been taken over for the conference and all had posters on them that they were gender neutral and contained individual stalls. The hospital prayer space was desegregated for the event, as prayers were held there during the conference.
There were about 200 people attending the conference and tickets had been snapped up very quickly. The organisers had attracted a wide range of people, from Muslims to Christian clergy. There was good provision for those who were trans or non-binary and name labels had pronouns on them. There was good intersex visibility as well. It is these things that make a conference a really affirming experience, even before you get to the talks.
The conference hashtag is #QueerIslam2019

The format of the day was an opening introduction to the conference and then we split into workshops. Parallel workshops were offered. I can only comment on those which I attended.
The first one I attended was Life as an LGBTQI+ Muslim in the UK, with Drew from the organisation Hidayah.  He is doing an ongoing survey and gave us a brief outline of results so far and compared these to results from Stonewall, showing the percentage of people who are open in their faith community about their sexual orientation or gender identity. These percentages are worryingly low. One significant factor is that they believe that their mosques would not be welcoming. This seemed a particular problem in respect of trans people.
Theologically being intersex or trans is not a problem in Islam. However, Islam and UK society are conflating ideas about sexual orientation and gender identity, in a way that is not helpful. There is a fear about bringing shame or dishonour to their families. This means that those who do come out do not always get the support that they would want. There is a need for more role models for LGBTQI+ Muslims, there are very few.
One significant issue is safety in places of worship, this needs to be addressed. When it is not safe, then it leads to people living a double life and exposes them to increased risk of racism or islamophobia. There is a need for inclusive mosques and for more work to be done on safety.

Next, I went to Martin’s talk on Being Intersex: gender and sex diversity affirmation in Islam. Those who are intersex have sex characteristics that do not fit the binary. They make up 1.7% of the population. It is a biological sex, not a gender identity. 52% of those who are intersex identify as heterosexual, but there is a spectrum of orientations.
Those who are intersex, including the speaker, are subjected to genital surgery as children, this surgery is carried out by the NHS. This form of genital mutilation is illegal under the Malta Declaration, but the UK has not signed this. Traditionally Islam is affirming of intersex.
Islam recognises four genders: male, female, intersex (khuntha) and transgender / gender queer (mukhannath). When praying in a mosque, many mosques separate people on gender lines. An intersex person can pray behind the men and in front of the women. They can also be imams for other intersex people and women.
Those who are Mukhannath, with male bodies, who present as female or gender queer are not proscribed against. They were welcomed into the home of the Prophet, according to Sura 24.31. Mukhannaths were the ‘guardians of sacred boundaries’, so they guarded sacred haram in Madina and Mecca.
Transgenderism in Islam is theologically unproblematic. In his book Tahrir al-wasila, Ayatollah Khomeini stated ‘if someone is confident of his / her belonging to the opposite sex, surgery does not transform him / her to the opposite sex, it rather reveals his / her true sex that has so far been hidden.’
However, there may be social problems and unsupportive families to contend with.

Next, in A journey of intersectionalities, Faz talked to us about his experiences as a trans Shia Muslim man. This was a lot of intersectionality to experience.
He knew he was trans from an early age and early memories of this focused around the length of his hair, which he wanted short, contrary to his family who wanted a more traditional girl like presentation.
Coming out to his family and social groups was fraught. There is always danger in these situations because of the danger of rejection and family status. Eventually his family reached the point where he could present as male, except on formal family occasions, such as weddings, but eventually he stopped having to go to these events.
He also shared some of his experiences of the working environment, where being a person of colour was a bigger source of discrimination.

Lunch was superb. Buffet style and lots of vegetarian and vegan options as well as halal food.

After lunch Quisar’s talk was Don’t read the comments: Queer Muslim self-care in a digital age. Major piece of advice – turn off the comments or at least do not read them.
Online discussions for QTPOC can focus on issues of colonisation. Colonised bodies are discussions by people who do not have the same bodies. Colonised minds, don’t fight on other people’s terms. Colonised spirit is how Islam is thought about and propagated by colonial forces.
A colonised mind is when we respond to the attacks of others and allow others to set the agenda. Some people on the internet start a discussion with an inflammatory statement and then encourage a debate in the comments, simply to try to show how ‘big’ their intellectual muscle it. Don’t respond to the provocation. Instead find your own community for support and discussion.
If you are asked to do something ‘get paid and add tax.’

Colonialism also featured at the start of Hafsa’s talk on Choosing Identities. Colonialism is an undercurrent which encourages those with intersectional identities to ‘ditch Islam’ as the primary identity. This colonialism ‘cultures’ people to act in a certain way.
There are also societal pressures, wanting queer Muslims to make a choice between serving God and finding love. This choice is horrible. Hafsa then used research from the Ozanne Foundation’s Faith and Sexuality survey to give some of the statistics about the attitudes of society and the way that LGBTQI+ people have to hide their identities and the conflict with their faith.
Forcing someone to be what they are not is damaging. We must call out bad behaviour. In particular, we must campaign to get conversion therapy banned, especially for young people. There is a huge need for safe spaces.

The final talk I went to was Ezra’s on Showing solidarity: including trans people in our mosques, meetings and minds. She explained that Allah is clear in this, that people were created different in order for us to learn tolerance, acceptance and celebration of our difference.
Iran is the country that carries out the second most gender confirmation surgeries. Thailand carries out the most. The Iranian statistics are not good news, because gay people are forced to transition, so they become ‘straight’.
When someone transitions in a mosque, you need robust equalities policies. Segregated spaces can cause problems. These segregated spaces are a problem for non-binary people too. There is a need for mosques to be inclusive and safe.
To be inclusive, if you have a meeting, do a pronoun round at the start of the meeting and get everyone to state their preferred pronouns. Then if someone is misgendered, deal with it straightaway.
Each of us can be an ally. In order to make trans people feel secure, you have to treat the concept of trans people first. Don’t wait for a trans person to arrive before you have the discussion.
Ezra used a poster to illustrate her talk and this was uploaded to twitter afterwards. I was not able to do a direct link to the post, but you can access it below. 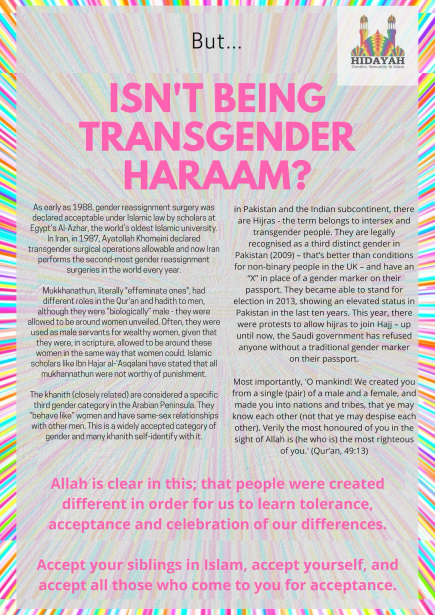 I have added new material to the resources and links page.  These are about Islam and LGBTQI+.  This page can be accessed here.

I have added a new event to the upcoming events page.  This page can be accessed here.

Coming next, the report on the excellent LGBTIQ+ Intersectionality and Islam conference 2019.