This is the must-read book in Roman Catholic LGBT+ theology. Father James Martin is a Catholic priest and a Jesuit.
The Catholic church is in a difficult place at the moment with respect to LGBT people. It finds it difficult to admit that we exist. The term LGBT is not yet used in official Vatican literature and affirming material is not widely available. [As an aside, when I visited St, Paul’s bookshop next to Westminster Abbey recently, there were five books about homosexuality on sale, all of them non-affirming and none of them using the term LGBT, some used the term same-sex attracted.] So even the sub title of Fr Martin’s book is controversial – How the Catholic Church and the LGBT Community can enter into a relationship of respect, compassion and sensitivity.
In some respects, this is a modest book in terms of its approach to scripture and its proposals, but considering the state of the Catholic Church, this is exactly the right approach. He uses the church’s own values to remind them of the way that people should be treated with respect, compassion and sensitivity. His approach is one that does not allow for condemnation of a person
Fr Martin’s approach to scripture takes a similar approach. He does not discuss the clobber passages, but instead chooses passages like the story of the Good Samaritan or Jesus healing the Centurion’s servant and psalm 139. Each scripture has questions for meditation. He challenges the reader and opens up discussion, making people think about the way LGBT people are treated and the worth of every person.
Even this gentle approach has drawn criticism from those who cannot even bear to speak our name and it is this silence that the author seeks to break through. He was inspired to write this book after the mass shooting at the Pulse nightclub in Orlando in June 2016 when he recognised that the silence from the Catholic leadership did not acknowledge the people who were killed.
The revised and expanded version of this book is available to buy at amazon.co.uk

This book is a memoir, written by journalist and broadcaster Mark Dowd, former head of the Catholic LGBT organisation Quest. It is a life lived fully as a Roman Catholic, and authentically gay. It is also the story of his parents’ journey. When his mother first learned that he was gay, she took him to the local doctor to be cured (the doctor ruled that it was just a phase and he would grow out of it), but by the end of the book, his mother is a regular attendee at Quest conferences.
In the opening paragraph of the preface he sets the scene with an encounter with a TV producer who asks him to suggest a documentary he would like to make. He replies that ‘I’d like to show why the Roman Catholic Church is so anti-gay’. Naturally, he is asked to explain why and his response is, ‘because it is so gay.’ This is one of the themes that recurs in the book, as he comes to realise that ‘gayness’ is widespread in the church and that this creates both a tension with official teachings and a safe place for young gay men to be without the pressure to get married to have children.
This is not a book of theology, but the author has the gift of being able to explain complex theological ideas simply and clearly. He is able to explain the link between the church’s teaching on artificial contraception and same sex sexual activity (both are not open to procreation), and why any change in official teaching on either of these would undermine the other and be a challenge to the authority of the Roman Catholic Church. To change the church’s teaching would require them to admit that their teaching was wrong and that would mean a serious loss of authority.
Instead he shows that rather than challenge teachings that they believe to be wrong, most Catholics, simply ignore them. He often refers back to the way that his parents just ignored the official line forbidding the use of artificial contraception and used it anyway. He takes a similar approach when the Roman Catholic Church issued new teaching documents on homosexuality. This is a very healthy approach for him as it allows him to focus on the good of the love he experienced, rather than the non-affirming church documents.
This book is well written and has a lot of humour, often at the author’s expense. It is very positive, affirming and written from the heart.
This review has previously appeared on the OneBodyOneFaith website.
This book is available to buy at amazon.co.uk 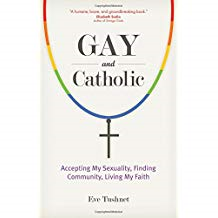 This is an American book, written by someone who is lesbian and catholic. Eve Tushnet has a reputation as a conservative, but I found her position far more interesting than that.
She is a convert to Catholicism and the first part of the book tells the story of how she became a catholic. As a new convert, she explores what the catholic church has to say about homosexuality and faith in the second part of the book.
What I found very refreshing in her account is that she keeps things very personal. She does not try to generalise her understanding on everyone else. She does see an expectation of celibacy by the church as something that she can do because she understands that she has a personal calling to celibacy. This is a church teaching that she can embrace because it speaks to her personal situation. She does not try to suggest that all homosexual catholics should be forced to follow this same path. She has many useful things to say about what is a vocation and what is not.
Throughout the book, she is looking to understand things for herself, in her context rather than universal and timeless truths. This means that she can both explain the conservative approach and accept and even affirm others who take a different view.
She is not a supporter of same sex marriage, which does put her firmly in mainstream conservative Catholicism, but she does not advocate the single life either. She acknowledges the benefit of spiritual friendship and family.
I found a certain integrity in her arguments, which were ideas that she imposed upon herself. This distinguishes her approach on some of these topics from those who seek to impose burdens on others that they are not willing to bear themselves.
This book is available to buy at https://www.amazon.co.uk