This excellent conference was organised by the Ozanne Foundation and took place on Saturday December 8th at St John’s church in Waterloo.

There was far too much taking place to squeeze it into one blog post, so this is part 1. All the talks were videoed and it is the intention that they will be made available for people to watch. Each talk was grounded in experience, so each academic lecture was started with someone explaining how they are personally affected by the material under discussion.
The day was hosted by the Very Revd Dr David Ison, the dean of St Paul’s Cathedral and vice-chair of the Ozanne Foundation. 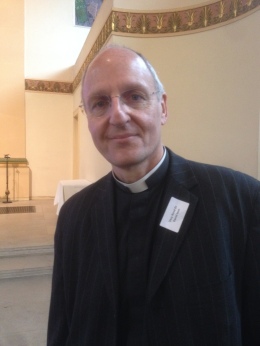 How do we understand truth and engage with reality? Last July, when General Synod reported on the Living in Love and Faith project, they started with St Augustine. Augustine understood a binary model of sex, based on his literal reading of Genesis. That was his reality. But the way that we see the world has changed in many ways and our newer perceptions of reality can challenge how we understand the Bible.
Genesis is not the only place in the Bible that explains how people are created. Psalm 139 also explains how we are created by God, but gives a more intimate and personal approach to our individual situation.
Dr Qazi Rahman, from King’s College London, talked on science and genetics. He spoke about the evidence for the biological basis of sexuality and the origins of human sexual orientation.
Behaviour has some biological basis. Genetics have a role in this and the evidence for this genetic role has come from twin studies. There is a closer correlation between identical twins that between non-identical twins.
Sexual orientation informs sexual attraction and this motivates behaviour and identity.
Gender non-conformity is strongly related to adult orientation. Those who are gay are more likely to gender non-conform as children. This is true for Eastern cultures as well as Western cultures. Gender non-conformity starts around 2 to 2 ½ years old. This is below the age where children start to recognise gender stereotypes, which is about 4 years old.
Gay brothers show shared markers on the X chromosomes. There is some evidence of shared markers on other chromosomes.
Twin studies have shown that family environment is not important. Evidence of ‘social recruitment’ is non-existent. Sexual orientation is not caused by social learning. The evidence for this is supported by the children of gay and lesbian parents, who have the same rate of homosexuality as the general population.
Sexual fluidity is not biologically based, but there is fluidity in sexual behaviour. Sexual attractions tend to stay constant, but behaviour can change. However, there is no bell-shaped curve for this, it is more J shaped with more heterosexuals than homosexuals and few in the middle. The curve is sharper for men, than for women, due to fewer men identifying as bisexual than women.
Biology authenticates gay people and should debunk some of the stigmatised ideas.

Click here to watch the video of this talk, which is now available on You Tube.