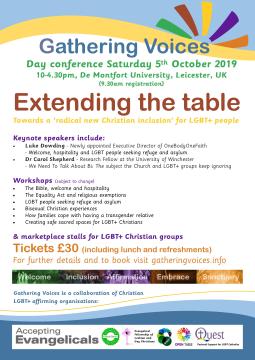 The latest Gathering Voices conference took place at De Montfort University on Saturday. This was another excellent conference and it was heartening to see that the number of people attending continues to increase.

The theme of this year’s conference was ‘extending the table’. It had a strong emphasis on being multi denominational and on the experience of being an LGBT asylum seeker in the UK as well as highlighting the invisibility of bisexuals.

The start of the conference was a video from the dean of Leicester, introducing these themes and welcoming people to Leicester.

Next was the first of the keynote speakers – Luke Dowding, the executive director of OneBodyOneFaith. He explained that he had trained for ordained ministry, but he had been denied ordination because he chose to marry his husband. In doing so they became the first couple to get married in a Baptist church in this country.

He discussed matters of intersectionality and diversity, suggesting that representation is a better concept that diversity. He explained that welcoming LGBT+ people to churches is only the start of a journey that should lead to inclusion and then to affirmation.

He gave an overview of the situation for LGBT+ people in several countries, starting with Albania, which he had gone to during his gap year. He showed through his discussions of India, Uganda and Brunei the oppressive legacy of British colonialism. Countries like Uganda did not criminalise homosexual acts until the arrival of the British. Of the 53 sovereign states which used to be British territories, 35 of them have made homosexuality illegal. It was also the influence of the British legacy that linked homosexuality with religion, for example seeing HIV as ‘God’s punishment’. Anti-sodomy Acts, section 377, are still on the statute books in many countries of the Commonwealth.

He commended the report published last month by MCC North London, the LGBT African asylum seeker research project. This shows the way that Christianity is being used as a tool against asylum seekers.
The report is available to download as a pdf here.

The other keynote speaker was Dr Carol A Shepherd of Winchester University, @bispacemission

The title of her talk was ‘We need to talk about Bi: The subject the church and LGBT+ groups keep ignoring’. It is easy to get knowledgeable speakers to talk about lesbian / gay or about trans, but well informed and articulate speakers about Bi and Christian are very hard to find, it was an area that the conference organisers were keen to address. As her talk was about Bi invisibility, she explicitly limited herself to discussions of sexuality and not gender.

Bisexuality is defined as ‘a romantic and / or sexual attraction to more than one gender’. This definition is taken from the Bisexual index.

She started by introducing herself and the books she has written. She wrote the book 119, under the pseudonym Jamie Sommers (the Bionic Woman). She also has a more academic book Bisexuality and the Western Christian Tradition.

These books are available to buy here and here.

She took us through a selection of important LGBT books and reports that say a lot about L, G and T but say little or nothing about Bi. These included the welcome message at Bradford Cathedral (@BradfordCathedral) and the Outcome report from the Methodists. The Church of England report Issues in Human Sexuality devoted only one paragraph to bisexuality – these were the 119 words that gave her the title of her first book. The expectation from this one paragraph was that those who were bisexual were expected to live their life as a heterosexual and not give in to their ‘disordered personality’.

She also showed that this was not limited to Christianity, the same erasure was present in other faiths as well. Her point was well made.

Homophobia and biphobia exist among the clergy. Some clergy use this to hide their own same sex experiences and attractions.

Carol Shepherd was the breakout success of this conference and I would thoroughly recommend any conference or group that wants to know more about bisexuality and Christianity should invite her to come and talk.

If I have misrepresented what the key speakers said, the mistakes are mine.  This report is what I understood from the talks.